Visual Studio 2008 made its presence since Nov 2007 but it did not had a major impact, Now Visual Studio 2010 is going to come but I am just now going through the new features of visual studio 2008

File –> New Project or New Website you can see this

The reason is all the version has same CLR 2.0 hence this feature has been given

I have been waiting for this feature for almost 3yrs when I started my career as web developer. This iscool feature previously, we debug JavaScript using alert box now those days are gone. we have JavaScript debug support

After the dawn of web 2.0 ASP.net has to move according. So they provided ASP.net AJAX which can be integrated with Visual Studio 2005 as Extension. Now Visual Studio 2008 has provided with JavaScript Intellisense support and making AJAX developer, JavaScript validation much easier.

Recently some part of the .Net Framework has been made open source hence this feature is no surprise, but important we can now debug through .net functions for example Gridview .Databinding() we can go through the method via debug

When Master Page was introduced in .net 2.0 framework, this feature was not there in VS 2005 in design time. But this is cool and promised feature that VS 2008 has delivered. You can created nested Master page and then it can be seen in the IDE itself rather than in runtime

Multithreaded Debugging Features in VS 2008

Sometimes the little features can make a world of difference. The VS 2008 debugger adds some help to those of us dealing with many threads running in our applications. The first is Show Threads in Source, which you can turn on either by selecting it from the context menu in the Threads window or the toggle button on the Debug toolbar (it’s the one with the wavy lines and plus sign). Once Show Threads in Source, you’ll see some new icons in the editor margin as shown below.

The Cool features in whole Visual Studio is IntelliSense when you type .  the intellisense drops down but it hides the code lines so to view those hidden codes press CTRL key it will automatically turn transparent and you can view the code and release the CTRL key you get back the IntelliSense box

Visual Studio 2008 now has a rich CSS editing experience with several new tools to make working with cascading style sheets (CSS) easier than ever. Much of the work designing the layout and styling content can be done in Design view using the CSS Properties grid, the Apply Styles and Manage Styles panes, and the Direct Style Application tool. You can also change positioning, padding, and margins in Design view using WYSIWYG visual layout tools 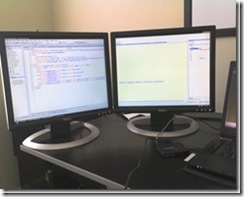 Imagine you could split the HTML Markup or XAML Markup and your C# code in two different monitor that cool rite no more going back to HTML Markup or XAML and coming back to C# code, In VS 2008 we can configure this split view feature to vertically, this allows developers to use maximum screen on laptops and wide-screen monitors

By releasing Expression Studio Microsoft official entry to design mode, Expression Blend is an alternative for Adobe Flash but has cool feature it can be coded via C# or VB.net and then it can consume web service very easily. So you can design in XAML using Blend and you right click and create C# code in Visual Studio on the Fly

This is my personal blog. Articles written in this blog are from my experience for my own reference and to help others. Do not reproduce my content anywhere, in any form without my permission. If any article written in this blog violates copyright, please contact me! If you have a more elegant solution on any of the topics discussed- please post a comment, I'll be happy to hear!